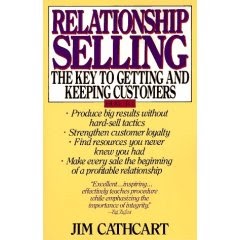 I'm the first one to admit that while I'm a relatively social person, I differ from some of my peers and fellow salespeople in that I'm likely to focus more on sales strategy than anything else.  The big question (that will likely never be answered) is:  How important is relationship-based selling over sales strategy and tactics?

Here's the argument for focusing on sales strategy and tactics:
If people can be described in a simple way, its probably that they are unpredictable.  All the sales psychology in the world can never predict the complex world of human behavior.  Scientists spend their whole lives, generation after generation, trying to predict how different types of people behave in different situations.  It's a no-win project.  Even after careful study and hours of interaction, no salesperson can really pin down the predictability of a customer.  All too often, I hear people in our industry tell me that "this customer's key is talking about football," or "take this guy to the BBQ place once a month and you're golden."  Sure, I'm simplifying this a bit, but here's my point:  If we draw the conclusion that there are many things we can't predict about a customer, why not focus on the things that we CAN predict.  That's where the science of selling rules supreme.  Use math:  more activity, better qualified prospects, frequent contact, be reliable, follow-up closely, propose solutions that impact their business (and them), keep good metrics of sales ratios (like closing ratio), and use common sense.  If salespeople focus on these scientifically proven methods (along with being a friendly, social person), doesn't that make more sense than "focusing on the relationship?"

Here's the argument for Relationship Selling:
It's going to sound silly, so brace yourself:  relationship selling works.  I can't produce the scientific studies, nor can I describe a methodology that salespeople can follow in regards to selling primarily on creating relationships.  There is a best-selling book on relationship selling by Jim Cathcart (it's interested and recommended).  Maybe one of the reasons for this, is simply because the core of relationship based selling is difficult to teach (and for that matter, even learned).  Go back to the argument that we really haven't figured out how to predict social behavior.  One thing is certain:  Salespeople who have miserable sales strategy and tactics, but who are phenomenal at building relationships, are very successful.  I've even seen extreme examples of this where the salesperson is down-right irresponsible in terms of basic sales blocking and tackling (even those who know next to nothing about the products/services they sell).  The proof is in the numbers.  Relationship creation and sustainability is almost legendary.  What's their secret?  How do they do it?  There's not a good answer, but there are similarities between great relationship-based salespeople.  They're often poor at looking at situations analytically, their attention to detail is hit or miss, and they prefer not to get bogged down in planning.  OK, these might be perceived as negative traits, but to the relationship-focused salesperson, these things actually get in the way of maintaining that magic formula with their customers.

I guess there will always be a bit of a debate regarding which way to lean.  I wish I could tell you that I see a bunch of salespeople with a nice blend of these two traits, but I wouldn't be telling the truth.  In fact, I've worked with and trained over 1,000 salespeople and very few could blend the two traits.  In reality, a good plan would be to team-up a strategist and a relationship-builder.  This is a team that cannot be stopped.