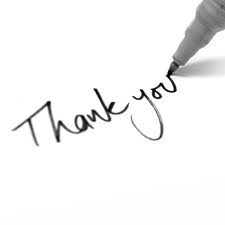 I highly recommend a small book I received as a gift a few years back called, "Say Please, Say Thank You," by Donald McCullough.    From the back cover: "When it seems that civilization is collapsing around us, can we really afford to take the time to worry about old-fashioned courtesy and day-to-day niceties?  The fact is, we can't afford not to.  Because civilization grows out of community . . . and a community is built with one small act of kindness at a time."

As my company just broke out a new box of blank Thank-You Note Cards today, I thought this a good time to reinforce the importance of sending these handwritten gems.

In today's fury of emails, its so easy to simply return from a customer meeting and type out a follow-up email.  At the end of the email we usually type, "Thank You."  As a matter of fact, I must admit, I actually have "Thank You," in my electronic signature.  Unfortunately, rarely is such an email drafted where providing thanks is the only topic.  As with the other hundred emails your customer gets, the message of gratitude is lost.  Here's some things to think about on the topic.  How will you make time in your schedule to write a real, hand-written Thank You Note?

Here's your call to action:  Go get a box of Thank You Notes (either from the store or from your company). When you send your follow-up email, that's your reminder to write a Thank You Note.  It takes six-weeks to develop a habit.  Commit to sending a few notes each week, for six weeks.

You and your customers will benefit.

A Halloween Story: Salesman in Hell 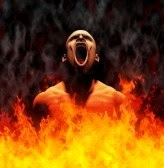 Mr. Frank Bones, Account Manager for the Crimson Insurance Company, felt a cold chill tickle the hairs on the back of his neck.  He sat in the dark, dank, cellar of the company (where the business had recently moved him), hunched over his chair while drops of sweat ran down his nose and puddled on the blotter of his calendar.  He was in a difficult situation.  There was only ten weeks left in the selling year.  Forty-two weeks had fled past him like the headless horseman's coach on the moors of a small country town.  While he reminisced on the meetings, phone calls, paperwork and deals he had toiled over during the past year, it now came down to this:  he needed a miracle to hit his quota.  Quota...quota...quota.  The words repeated themselves over and over like a hungry zombie moaning for his brains.

Frank stood up and paced around the desk.  "I've got to get my head on straight," he said aloud as the buzz of the air conditioner grew louder in the company basement.   Ten weeks to book a half a million dollars to hit quota.  Ten weeks before the weight of the company executives would be squarely on his shoulders.  He imagined the horrified look on his manager's face as he would be called into the cramped conference room.  "Frank, we've got a problem," the manager would say.  "This isn't personal, and you know how much we like you here at Crimson."  Frank knew what the manager would say next.  "You've put yourself in an awkward situation.  We've talked dozens of times about your sales performance," the beady-eyed monster-manager would say.  As if he were in a prescient dream, Frank closed his eyes and immersed himself further in the future meeting.  "We're going to need to put you on a Performance Improvement Plan," cried the manager.  Frank had heard about the dreaded Performance Improvement Plan.  Everyone around the office called it the PIP.  The dreaded PIP.  The kiss of death PIP.  The poisonous, foul-smelling stench of the PIP.  He imagined himself drowning in a graveyard of decaying flesh.

Startled, Frank quickly opened his eyes and saw the vibrating cell phone flashing on his desk.  Who could be calling him at this hour?  He rubbed his eyes to clear the foggy vision of the phone screen.  In clear bold letters, the caller ID spelled:  P I C K  U P.  Frank didn't think this was funny; not in his current state of mind.  "Who has a caller ID of P I C K  U P," he thought.  Frank quickly silenced the ringer.  "What kind of freak has that caller ID," he said aloud, now in a state of panic.  He'd figure it out tomorrow, when he could get his head clear.

The phone rang again.  Slowly, Frank peered down to see what kind of game somebody was playing on him.  The called ID was the same.  Apparently, this was not going to stop.  "This is Frank," he mumbled as he pressed the "accept" button on the phone and brought the handset up to his ear. "Frank, don't talk.  Just listen," said the eerily familiar voice on the other side of the call.  "Listen carefully now buddy.  I know this is going to be difficult to believe, but I'm you...sort of.  Better put, I'm the future you.  I'm Frank Bones in 2016."

"Who is this?" cried Frank.  "I'm going to kick your ass Doug.  How did you do that caller ID trick?"

"Frank, you know I'm telling you the truth.  Remember when we were 17 and we blew up that mailbox of old lady Sellers that summer?  Remember the time you stole that radar detector from Radio Shack when we were 22?  Nobody knows about that, right?" said the future Frank.

Frank's mind raced recalling those past events.  He never told anyone about that radar detector.  Maybe this was a dream.  Maybe it was the six tacos he'd eaten for lunch.  Maybe this really was the future Frank.  He barked at the phone, "OK, if you're some future version of me, you should know exactly what I'm doing at the office so late tonight."

There was silence on the phone for a slow five seconds.  "You're at the office tonight because you're worried about not hitting your sales quota for the year and you're trying to figure out what to do," said future Frank.

Frank was astonished, and in moments, he felt the grip of acceptance wash over his mind like a warm blanket.  "Holly Crap," Frank replied.  "You've got my attention.  I can barely believe it.  Why...I mean...what do you want?"

"I'm here to help you Frank.  I mean, I'm here to help us," said future Frank.  "I only have a few minutes, though.  Something about this whole thing tells me our phone call will end soon and I won't be able to call you back this time.  Listen carefully."

Frank raced back to the desk and got out his pen and paper.  How many times does your future self call you with advice?  He thought he'd likely need to write this down.  "OK, I'm ready," said Frank.

"Good.  Frank, I want you to know that everything's going to be OK.  I was there, just like you are now.  I was sitting in that same basement, thinking about quota, wondering what to do.  I was you three years ago.  A few months from now, you're going to hit your quota.  I've told myself over and over that if I could ever help anyone get through the situation you're in, I would.  So I'm going to give you way out of your predicament.  Write this down Frank.  For some reason, I'm thinking the phone is going to disconnect right after this.  Good luck Frank.  Heed my words."

There was a moment of silence on the line.  Frank was excited.  He felt as he was going to get the secret to eternal life.  This was the moment he had been searching for.  Why wasn't future Frank saying anything. "Frank, are you still there?  Frank?  Frank?"

Future Frank spoke.  Frank wrote down the advice.  The call disconnected quickly.  Here's Frank's advice to himself.  It's also advice to you or anyone who finds themselves in this Halloween Horror Story.  As Frank told himself, "Heed my words."

FRANK'S ADVICE TO HIMSELF (as written by Frank Bones)