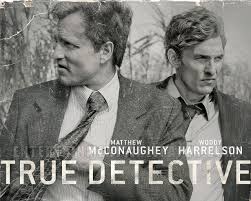 As the magic of television and film continues to dazzle us as consumers, one trend I've noticed is that things are becoming more and more realistic.  As an example, today's westerns no longer show John Wayne with a clean red scarf and immaculate cowboy gear.  Westerns today show the dirty, terrible, violent side of what living on the frontier might have been like.

I recently caught the bug of a new HBO series called "True Detective."  It's not for everyone and it's only in the second season, but my wife and I we utterly consumed by season one's gritty reality.  The show focuses on both the exciting and mundane world of law enforcement investigation.  Unlike a "Law and Order,"  in "True Detective," we're not spared the tedious and frustrating nature of tracking down a lead, checking old public records, or shifting-directions as one lead looks more promising than the other.  The series also shows the importance of visualizing an investigation by story-boarding things like connections between people, locations involved, statements made and more.

As I watched the drama unfold over season one, I starting thinking about the parallels of criminal investigations (that a police detective might do), and the "investigations" salespeople do every day.


In many respects, all salespeople are detectives.  We aim carefully, define prospects, investigate clues and set the right influence to capture the sale.  Visualize your sale...connect the dots.  No badge required. 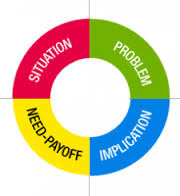 SPIN selling methodology has been a 30-year old staple for the sales community.  Developed by Neil Rackham from a large observation study with Huthwaite (a study/development organization), I recently had the opportunity to attend a formal 3-day training course on the sales methodology.

I must admit, I was somewhat skeptical before the class.  I have not only been a "student of sales" for about 20 years, but I've also been a professional sales instructor.  I have attended half a dozen training workshops on sales methodology, but had never been introduced to SPIN until the class.  The class was led by a professional instructor from Huthwaite, so I knew I was going to get the information directly from the source of the methodology (Rackham sold the methodology to Huthwaite some time ago).

For those of you unacquainted with SPIN, the methodology is derived from a large focused study of sales/buyer interactions (Huthwaite continues to update/affirm the results even today).  The material has a scientific approach in that the ideas are presented simply and factually:  "We saw this behavior from salespeople, and here were the results."  In essence, the methodology revolves around a defined Buyer's Sales Cycle, which originates by understand the buyer's Explicit Needs.  Everything in the methodology surrounds these Explicit Needs by asking SPIN questions (Situation, Problem, Implication and Needs-Payoff).  A full sales methodology unfolds, including all of the components you might expect (meeting formats, questioning skills, buyer interactions, approaches, objections and moving the sale forward).

The workshop was extremely interactive with plenty of role-play, exercises and group discussions.  The program blends well with other consultative-selling programs (methods in which the selling methodology is focused around the customer).  There were several times where I had an "ah-ha" moment (which is the sign of a strong class).

Here's my overall feedback:
I think SPIN is a solid, effective and sound sales methodology that puts the customer's needs first.  It is especially effective for complicated/enterprise solution selling.  It's a bit surprising on how relative the methodology still is after such a long time, but it absolutely ranks up there with any competitive sales process.  There is a learning curve, and many acronyms/processes that will require reinforcement, but I think this is true of most good methodologies.

If there are sales professionals out there that haven't adopted a formal sales methodology (which you should  - just look at the science), I think SPIN is a good choice.

The Fight with the DirectTV Salesperson 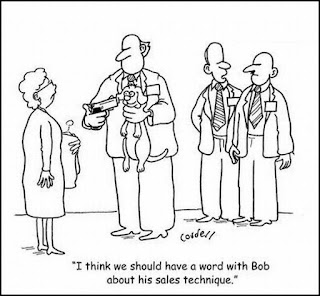 I got into a fight the other day at my local Best Buy.  OK, it wasn't a fist fight.  It was more of a heated argument.  But there I was, in the middle of the Best Buy, at the brink of yelling at this salesperson.  What happened?  How could I have gotten myself into this position?  What was the cause of all of this distress?  Well, the reason I was arguing was because of sales methodology!

I was casing my neighborhood Best Buy, checking out new tech, looking for super deals, you know, the usual.  I was inside the store for no more than one or two minutes before I noticed somebody, out of the corner of my field of vision.  It was the DirectTV sales gal.  I knew this woman.  I had encountered her before.  I knew her MO.  I had to cut through the discount DVD aisle to avoid her. I swallowed hard and dodged past the memory cards.  Whew, that was a close one.  I thought I was saved.

I was having flash-backs of my other encounters with her.  It always started the same.  First it was, "Hi, how are you doing today?"  To which I had tried various responses with always the same outcome.  Her response was some pleasantry, followed by, "Are you a DirectTV subscriber?"  It didn't really matter whether I would answer truthfully (which would have been, "no,") or whether I lied and said, "yes, and I love DirectTV, thank you!" She would start the hard sell at that point, and regardless of my pleas to be removed from the situation (like "I'm really not interested, but thank you"), the deadly objection-handling phrase would always come:  "You're not interested in saving money?"  It makes my blood boil just writing the words.  I think of all of the people who signed up for DirectTV service because they simply couldn't get away from her.

My ending encounters with her were also always the same.  I felt bad, but simply had to walk away to be released from her grasp.  Today, however, I wasn't going to let her get away with these hard-handed sales techniques.  She had to hear the truth, no matter how badly it hurt.  Somebody had to be responsible to tell her that she couldn't treat people like this.  Today would be the day that I stood up to the DirectTV sales gal.

She caught me near the Dyson vacuum cleaners when I least expected it.  After the same old aggressive sales pitch, it was time for reality.  "Do you realize that this is the third or fourth time you've solicited me here in the store?" I asked her.  She was stunned, but way too salty to let that distract her.  I continued.  "Do you understand how body language works?  When I say 'no thank you,' and walk away from you, that is your clue to leave me alone?"  Her eyes opened wider, ready for battle.  She retorted, "I'm sorry you feel that way, I genuinely want to save you money."  I was in disbelief.

In the next few minutes, I came to understand that she was actually a sales manager, and she taught her salespeople this approach.  She didn't seem to care that she was bullying people by using sales tactics and pressure.  I begged her to reconsider what she was doing.  When the argument ceased, her last question to me was this, "What would like me to do?"  My reply was short, simple and honest.  I told her, "I want you to change."

Maybe, after I left, she went right back to pressuring my neighbors to buy her fares.  Maybe she just thought I was a jerk.  Maybe I was.  But maybe I planted a seed with her that people can't be treated as targets, pressured into commitments by complex sales tactics.  At one point, I asked her, "would you like to be treated like this?"  She said, "I don't know what you're talking about."

Maybe I'll shop at Frys Electronics from now on.  Part of me is afraid the DirectTV lady will be there on her day off.

"It doesn't really matter what I sell" - oh really?

Throughout my career, I've interviewed hundreds of sales candidates.  My interviewing approach has changed dramatically over the years, and I now find myself spending more time talking to candidates about their motivations, why they do what they do.  While it is relatively easy to identify people who are passionate about selling, I find it fascinating that a small subset of people don't really care what it is that they are actually selling.

These folks fall into a "true believer" status.  They are convinced that they are so good at sales, they can sell anything they want (cars, toilet paper, software . . .  you name it).  While I get the concept that if you can build relationships, understand the goals/needs of your customer, and approach things with integrity - you will be successful - but, what about the passion?

I believe we are better at selling things we are passionate about (and not as good at selling things that don't interest us).  I often find myself in an interview with a sales candidate thinking, "This candidate has had five positions in 20 years all in a specific industry, selling the same thing, and now they want to sell something completely different.  Why is that?"  When I inquire, sometimes I get a surprising response:  "It doesn't really matter what I sell."  Hmm.  I think it does.  And if it does, as a sales manager, I only want to hire those candidates who can be passionate about what WE sell.  It should matter what you sell.  This falls under the concept of sales "belief."  You must believe in your product or service.  Not only do you have to believe in it, but the more passionate you really are, the more successful you are likely to be.

Think about this one when you face a potential career change.  What would I LOVE to sell.  What am I really passionate about.  Go sell that!