How Fred Rogers Changed My Life 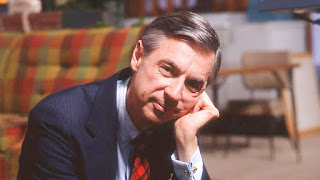 "Won't You Be My Neighbor."  I finally got curious enough to watch this special documentary on HBO about the life of Fred Rogers and his impact on not only television, but on all of our lives.  I fondly remember watching his show as child in late 60's and 70's.  Sure, it wasn't as cool as the cartoons or reruns of Gilligan's Island, but there was something special about Mr. Rogers Neighborhood (which ran for more than 30 years (800+ episodes).  I remember the Neighborhood Trolley, King Friday, feeding the fish, "picture-picture," and who could forget the special deliveries that came to Mr. Rogers' door everyday.

As the documentary develops, you really get to see who Fred Rogers really was behind the camera (spoiler:  he's the same as he is in front of the camera).  Did you know that he swam a mile in the pool everyday and weighed exactly 143 pounds for 30 years?  He was so concerned with the feelings of children and how our environment impacts them, he went to congress when funds were being threatened and got $20M for PBS.  Needless to say, I highly recommend that everyone watch this one.

At the risk of exposing too much of my feelings, I'm going to "put myself out there" with three key things that really "challenged" me (in a positive way) by watching the film:

I'll say it.  Mr. Rogers is an inspiration for me.  I think he was ahead of his time and knew something that we don't.  In his soft spoken voice, I think he would tell us to spend our time, effort and lives doing something that promotes kindness and love towards one another.  Pretty cool.

Posted by adam@aboutsalespeople.com at Sunday, March 10, 2019